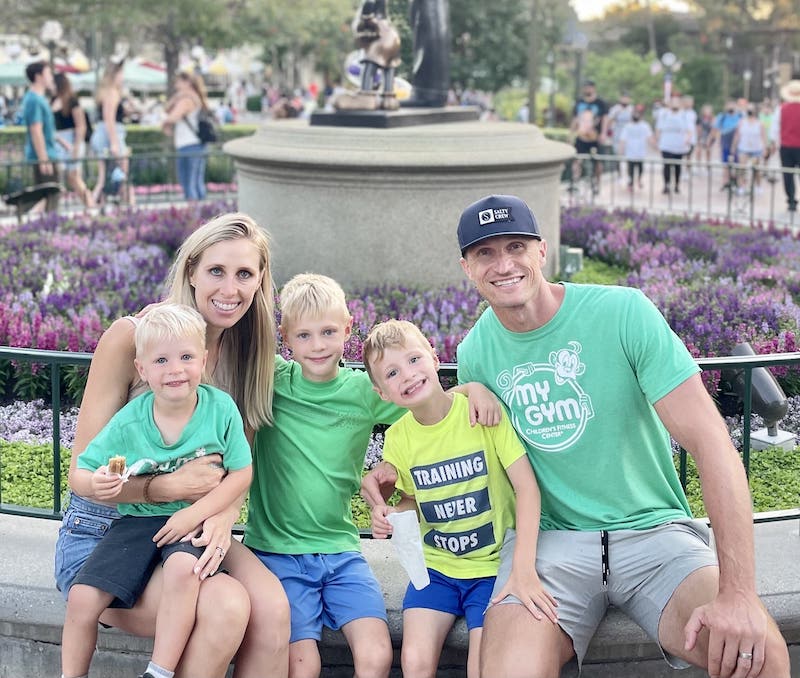 Tell us about yourselves!

I (Cam) grew up a sports obsessed kid in the Bay Area. I went on to Cal-Berkeley, where I played Football and Rugby, and even had a stint playing for the United States 7’s Rugby Eagles. Despite a few broken noses, my sporting career somehow led into some opportunities in front of the camera as a professional fashion model, appearing in campaigns for such companies as Dolce & Gabbana, Ralph Lauren, and Abercrombie & Fitch. I opened up a personal training business and a film/TV production company in my 20s, went back to school at UCLA for an MBA when I hit 30, and spent the majority of my 30s as a Business Development Executive at companies such as NBC Universal and Adidas. I am thrilled to be getting back to my entrepreneurial roots and pursuing my passion of helping kids lead a healthier and happier life through fitness and movement.

I (Alexia) was born and raised in Bozeman, MT. Plans to play Volleyball in college abruptly ended my Senior year in high school, when I tore a couple ligaments in my knee. Looking to venture out to a different part of the country, I decided to attend the University of Georgia as a Journalism major. In college, I was fortunate to land a pretty sweet gig as a production associate with ESPN and got to travel around the Southeast covering some of the NCAA’s biggest sporting events. My career after college took me to New York and San Francisco and, ultimately, led me to Los Angeles, where I worked in Entertainment PR. After kids came into the picture, I realized how important it was for me to prioritize family, community and work/life balance. I wound up going to graduate school for Interior Design in 2017 and opened up my own shop shortly thereafter, which allowed me more flexibility with my work schedule.  I’ve been able to help deliver some happiness to families one house at a time and bring my kids along for the ride. I believe so much in the mission of My Gym and am so excited to continue that community building here in SD!

We (Cam & Alexia) met at baggage claim at the JFK airport in New York almost a decade ago. Both of us were on the same flight from LA to NYC and after striking up a conversation while waiting for luggage, we made plans to meet up when we were both back in LA. Less than a year later, we were married, and not long after, the kiddos started coming. Donald, 7, is our oldest. He loves swimming, learning everything he can learn about reptiles, and playing with friends. Henderson (Hendo), 4 1/2, came next. He has a huge heart and wants to be a race car driver when he grows up... to both his parents’ trepidation. Fred (Freddy) is our youngest, coming up on 3 this November. He is rambunctious, fun, and loves playing any and all sports.

What are your hobbies? How do you and your family like to spend your time?

We are a very active family of 5! Hiking and splashing in puddles has given way to more beach and pool time since we moved from Oregon to San Diego. We love spending time with friends and family and getting to know and build our new community in SD!

How did you discover My Gym?

Donald started attending the My Gym in Woodland Hills, CA, right around his first birthday and we were all immediately hooked. We loved how much the classes aided both his physical and social development and the joy he had every time he went to class. Fortunately, when we moved up to Oregon, there was a My Gym just opening in Happy Valley. We joined there and Donald, Hendo and Freddy have all had such a blast and received so many benefits from attending My Gym through the years that we knew it was something we wanted to get involved with on the business side, too.


What are you most excited about in bringing My Gym to the San Diego area?

We are thrilled to have the chance build on the good work that has already been done in establishing the gyms in Poway and La Jolla. Our focus is on creating an amazing culture at the gyms, where everyone who comes through the doors knows how special and valued they are. We believe so much in what My Gym has to offer and hope as many kids as possible have the opportunity to experience it. We love doing purposeful work and cherish this opportunity to hopefully add some great value to our new city.
Privacy Policy Statement of Inclusivity Terms of Use Site Map Partners Contact Us Careers Blog MyGym.com
Copyright 2022 My Gym Enterprises. All Rights Reserved.

Change Location   Reset Cookie Option
By submmitting this form, you consent to receive emails about My Gym's promotions, upcoming events, and gym news. You can unsubscribe at any time. We respect your right to privacy and will never share your information with any third party.
GET 2 WEEKS FOR $29